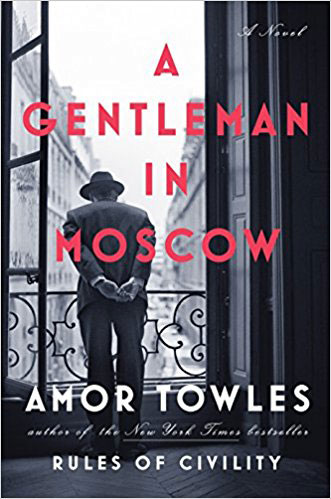 With his breakout debut novel, Rules of Civility, Amor Towles established himself as a master of absorbing, sophisticated fiction, bringing late 1930s Manhattan to life with splendid atmosphere and a flawless command of style. Readers and critics were enchanted.

A Gentleman in Moscow immerses us in another elegantly drawn era with the story of Count Alexander Rostov.

When, in 1922, he is deemed an unrepentant aristocrat by a Bolshevik tribunal, the count is sentenced to house arrest in the Metropol, a grand hotel across the street from the Kremlin.

Rostov, an indomitable man of erudition and wit, has never worked a day in his life, and must now live in an attic room while some of the most tumultuous decades in Russian history are unfolding outside the hotel’s doors. Unexpectedly, his reduced circumstances provide him a doorway into a much larger world of emotional discovery.

Brimming with humor, a glittering cast of characters, and one beautifully rendered scene after another, this singular novel casts a spell as it relates the count’s endeavor to gain a deeper understanding of what it means to be a man of purpose.

1. In the transcript at the opening of A Gentleman in Moscow, the head of the tribunal and Count Rostov have the following exchange:

“Secretary Ignatov: I have no doubt, Count Rostov, that some in the galley are surprised to find you charming; but I am not surprised to find you so. History has shown charm to be the last ambition of the leisure class. What I do find surprising is that the author of the poem in question could have become a man so obviously without purpose.

Rostov: I have lived under the impression that a man’s purpose is known only to God.

Secretary Ignatov: Indeed. How convenient that must have been for you.”

To what extent is A Gentleman in Moscow a novel of purpose? How does the Count’s sense of purpose manifest itself initially, and how does it evolve as the story unfolds?

2. Over the course of Book Two, why does the Count decide to throw himself from the roof of the Metropol? On the verge of doing so, why does the encounter with the old handyman lead him to change his plans?

4. The majority of A Gentleman in Moscow is told in the third person from the Count’s point of view. There is, however, an overarching narrator with a perspective different from the Count’s. Initially, this narrator appears in footnotes, then in the “Addendums,” then in the historical introductions of “1930,” “1938,” and “1946.” How would you characterize this narrator? How does he differ from the Count in terms of his point of view and tone of voice? What is his role in the narrative?

5. In the “1946” chapter, Mishka, Osip, and Richard each share with the Count his perspective on the meaning of the revolutionary era. What are these three perspectives? Are you inclined to agree with one of them; or do you find there is some merit to each?

6. One of the pleasures of writing fiction is discovering upon completion of a project that some thread of imagery has run through the work without your complete awareness—forming, in essence, an unintentional motif. While I was very conscious of the recurrence of tolling bells, keys, and concentric circles in the book, here are a few motifs that I only recognized after the fact: Packages wrapped in brown paper, such as the Maltese Falcon, Mishka’s book of quotations, the Russian nesting dolls discovered in the Italians’ closet, and the Count’s copy of Montaigne (in Paris). The likeness of stars,such as the freckles on Anna’s back and the beacon on the top of the Shukhov radio tower. Sailors (often in peril), such as Robinson Crusoe, Odysseus, Admiral Makarov, and Arion in the myth of Delphinus. What role do any of these motifs play in the thematic composition of the book? And if you see me in an airport, can you explain them to me?

7. How does the narrative incorporate the passage of time, and does it do so effectively? Thematically speaking, how does the Count’s experience of Time change over the course of the novel and how does it relate to his father’s views as embodied by the twice-tolling clock? What does the novel suggest about the influence of individuals on history and vice versa?

8. At the opening of Book Five, the Count has already decided to get Sofia out of Russia. What occurs over the course of Book Four to lead him to this decision? Why does he choose to remain behind?

9. Near the novel’s conclusion, what is the significance of the toppled cocktail glass in Casablanca?

10. This is a novel with a somewhat fantastical premise set half a century ago in a country very different from our own. Nonetheless, do you think the book is relevant today? If so, in what way?

Other Works by Amor Towles

If You Liked A Gentleman in Moscow, May We Recommend …

Caught in the Revolution, Helen Rappaport
The Noise of Time, Julian Barnes
The Patriots, Sana Krasikov
Any Human Heart, William Boyd
The Mayakovsky Tapes, Robert Littell
The Collected Tales, Nikolai Gogol
The Unbearable Lightness of Being, Milan Kundera
If on a Winter’s Night a Traveler, Italo Calvino
The Elegance of the Hedgehog, Muriel Barbery
The Big Greet Tent, Lunmila Ulitskaya

New York Times Book Review of A Gentleman in Moscow

NPR Book Review of A Gentleman in Moscow

Condé Nast Traveler, The Hotel That Inspired Amor Towles’ ‘A Gentleman in Moscow’

PODCAST: DYI MFA, “World-Building from the Inside Out — Interview with Amor Towles”