FacebookTwitterYoutubeInstagram
Behind the Beautiful Forevers by Katherine Boo kleyba 2018-01-08T16:13:59-07:00 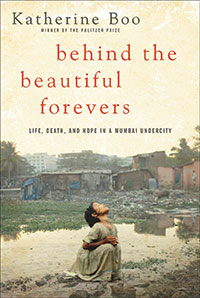 Book Club is Full, please email dpcommunity@denverpost.com to get on our wait-list

Winner of the National Book Award for Nonfiction

In this brilliantly written, fast-paced book, based on three years of uncompromising reporting, a bewildering age of global change and inequality is made human.

Annawadi is a makeshift settlement in the shadow of luxury hotels near the Mumbai airport, and as India starts to prosper, Annawadians are electric with hope. Abdul, a reflective and enterprising Muslim teenager, sees “a fortune beyond counting” in the recyclable garbage that richer people throw away. Asha, a woman of formidable wit and deep scars from a childhood in rural poverty, has identified an alternate route to the middle class: political corruption. With a little luck, her sensitive, beautiful daughter—Annawadi’s “most-everything girl”—will soon become its first female college graduate. And even the poorest Annawadians, like Kalu, a fifteen-year-old scrap-metal thief, believe themselves inching closer to the good lives and good times they call “the full enjoy.”

But then Abdul the garbage sorter is falsely accused in a shocking tragedy; terror and a global recession rock the city; and suppressed tensions over religion, caste, sex, power and economic envy turn brutal. As the tenderest individual hopes intersect with the greatest global truths, the true contours of a competitive age are revealed. And so, too, are the imaginations and courage of the people of Annawadi.

With intelligence, humor, and deep insight into what connects human beings to one another in an era of tumultuous change, Behind the Beautiful Forevers carries the reader headlong into one of the twenty-first century’s hidden worlds, and into the lives of people impossible to forget.

1. Barbara Ehrenreich calls Behind the Beautiful Forevers “one of the most powerful indictments of economic inequality I’ve ever read.” Yet the book shows the world of the Indian rich–lavish Bollywood parties, an increasingly glamorous new airport–almost exclusively through the eyes of the Annawadians. Are they resentful? Are they envious? How does the wealth that surrounds the slumdwellers shape their own expectations and hopes?

2. As Abdul works day and night with garbage, keeping his head down, trying to support his large family, some other citydwellers think of him as garbage, too. How does Abdul react to how other people view him? How would you react? How do Abdul and his sort-of friend, Sunil, try to protect themselves and sustain self-esteem in the face of other people’s contempt?

3. The lives of ordinary women– their working lives, domestic lives, and inner lives–are an important part of Behind the Beautiful Forevers. The author has noted elsewhere that she’d felt a shortage of such accounts in nonfiction about urban India. Do women like Zehrunisa and Asha have more freedom in an urban slum than they would have had in the villages where they were born? What is Meena, a Dalit, spared by living in the city? What freedoms do Meena, Asha, and Zehrunisa still lack, in your view?

4. Asha grew up in rural poverty, and the teenaged marriage arranged by her family was to a man who drank more than he worked. In Annawadi, she takes a series of calculated risks to give her daughter Manju a life far more hopeful than that of other young women such as Meena. What does Asha lose by her efforts to improve her daughter’s life chances? What does she gain? Were Asha’s choices understandable to you, in the end?

5. The author has said elsewhere that while the book brings to light serious injustices, she believes there is also hope on almost every single page: in the imaginations, intelligence and courage of the people she writes about. What are the qualities of a child like Sunil that might flourish in a society that did a better job of recognizing his capacities?

6. When we think of corruption, the examples tend to be drawn from big business or top levels of government. The kind of corruption Behind the Beautiful Forevers show us is often described as “petty”. Do you agree with that characterization of the corruption Annawadians encounter in their daily lives? Why might such corrruption be on the increase as India grows wealthier as a nation?

7. Does Asha have a point when she argues that something isn’t wrong if the powerful people say that it’s right? How does constant exposure to corruption change a person’s internal understanding of right and wrong?

8. Shortly before Abdul is sent to juvenile jail, a major newspaper runs a story about the facility headlined: “Dongri Home is a Living Hell.” Abdul’s experience of Dongri is more complex, though. How does being wrenched away from his work responsibilities at Annawadi change his understandings of the hardships of other people? Are terms like liberty and freedom understood differently by people who live in different conditions?

9. Fatima’s neighbors view her whorling rages, like her bright lipsticks, as free comic entertainments. How has her personality been shaped by the fact that she has been defined since birth by her disability–very literally named by it? Zehrunusa waivers between sympathy for and disapproval of her difficult neighbor. In the end, did you?

10. Zehrunisa remembers a time when every slumdweller was roughly equal in his or her misery, and competition between neighbors didn’t get so out of hand. Abdul doesn’t know whether or not to believe her account of a gentler past. Do you believe it? Might increased hopes for a better life have a dark as well as a bright side?

11. Many Annawadians–Hindu, Muslim, and Christian– spend less time in religious observance than they did when they were younger, and a pink temple on the edge of the sewage lake goes largely unused. In a time of relative hope and constant improvisation for the slumdwellers, why might religious practice be diminishing? What role does religious faith still play in the slumdwellers’ lives?

12. Who do you think had the best life in the book, and why?

13. In the Author’s Note Katherine Boo emphasizes the volatility of an age in which capital moves quickly around the planet, government supports decline, and temporary work proliferates. Had the author followed the families of Annawadi for only a few weeks or months, would you have come away with a different understanding of the effects of that volatility? Does uncertainty about their homes and incomes change how Annawadians view their neighbors? Does economic uncertainty affect relationships where you live?

14. At one point in the book, Abdul takes to heart the moral of a Hindu myth related by The Master: Allow your flesh to be eaten by the eagles of the world. Suffer nobly, and you’ll be rewarded in the end. What is the connection between suffering and redemption in this book? What connections between suffering and redemption do you see in your own life? Are the sufferers ennobled? Are the good rewarded in the end?
(Questions issued by publisher)

If You Liked Behind the Beautiful Forevers, may we recommend …

Beautiful Thing, by Sonia Faleiro
A Free Man, by Aman Sethi
Dancing With the Devil in the City of God, by Juliana Barbassa
Factory Man, by Beth Macy
Hillbilly Elegy, by J. D.Vance
The Year of the Runaways, by Sunjeev Sahota
Evicted, by Matthew Desmond
A Fine Balance, by Rohinton Mistry
City of Djinns, by William Dalrymple
A Suitable Boy, by Vikram Seth

VIDEO: Katherine Boo on Behind the Beautiful Forevers

Washington Post Book Review of Behind the Beautiful Forevers