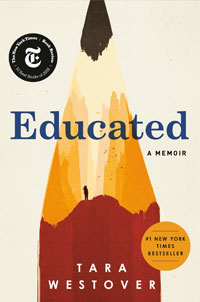 An unforgettable memoir about a young girl who, kept out of school, leaves her survivalist family and goes on to earn a PhD from Cambridge University.

Tara Westover was seventeen the first time she set foot in a classroom.

Born to survivalists in the mountains of Idaho, she prepared for the end of the world by stockpiling home-canned peaches and sleeping with her “head-for-the-hills” bag. In the summer she stewed herbs for her mother, a midwife and healer, and in the winter she salvaged metal in her father’s junkyard.

Her father distrusted the medical establishment, so Tara never saw a doctor or nurse. Gashes and concussions, even burns from explosions, were all treated at home with herbalism. The family was so isolated from mainstream society that there was no one to ensure the children received an education, and no one to intervene when an older brother became violent.

When another brother got himself into college and came back with news of the world beyond the mountain, Tara decided to try a new kind of life. She taught herself enough mathematics, grammar, and science to take the ACT and was admitted to Brigham Young University.

There, she studied psychology, politics, philosophy, and history, learning for the first time about pivotal world events like the Holocaust and the Civil Rights Movement. Her quest for knowledge transformed her, taking her over oceans and across continents, to Harvard and to Cambridge University.

Only then would she wonder if she’d traveled too far, if there was still a way home.

Educated is an account of the struggle for self-invention. It is a tale of fierce family loyalty, and of the grief that comes from severing one’s closest ties.

With the acute insight that distinguishes all great writers, Westover has crafted a universal coming-of-age story that gets to the heart of what an education is and what it offers: the perspective to see one’s life through new eyes, and the will to change it.

1. Many of Tara’s father’s choices have an obvious impact on Tara’s life, but how did her mother’s choices influence her? How did that change over time?

2. Tara’s brother Tyler tells her to take the ACT. What motivates Tara to follow his advice?

3. Charles was Tara’s first window into the outside world. Under his influence, Tara begins to dress differently and takes medicine for the first time. Discuss Tara’s conflicting admiration for both Charles and her father.

4. Tara has titled her book Educated and much of her education takes place in classrooms, lectures, or other university environments. But not all. What other important moments of “education” were there? What friends, acquaintances, or experiences had the most impact on Tara? What does that imply about what an education is?

5. Eventually, Tara confronts her family about her brother’s abuse. How do different the members of her family respond?

6. What keeps Tara coming back to her family as an adult?

7. Ultimately, what type of freedom did education give Tara?

8. Tara wrote this at the age of thirty, while in the midst of her healing process. Why do you think she chose to write it so young, and how does this distinguish the book from similar memoirs?

9. Tara paid a high price for her education: she lost her family. Do you think she would make the same choice again?

Other Works by Tara Westover
Educated is Tara Westover’s only published full-length work. Outside of her academia, here are a few other items she has penned, all of which are available at the author’s website:
• “The Un-Instagrammable Self,” (Northeastern Commencement Address, 2019)
• “The Places Where the Recession Never Ended,” (Q&A with Jeffrey Goldberg in The Atlantic, 2019)
• “Is College Merely Helping Those Who Need it Least?,” (Review of The Years That Matter Most by Paul Tough, 2019)

If You Liked Educated, may we recommend …

Northeastern Commencement Address 2019, “The Un-Instagramable Self”

Vogue: “Tara Westover on Turning Her Off-the-Grid Life Into a Remarkable Memoir”

The Guardian Interview, “In Families Like Mine There is No Crime Worse Than Telling the Truth,”

WBUR Interview, “Author Tara Westover On What It Means To Be ‘Educated'”

VIDEO: ACE2019: Tara Westover and Nick Anderson on the Transformative Power of Education