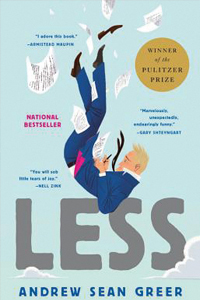 Who says you can’t run away from your problems?
You are a failed novelist about to turn fifty. A wedding invitation arrives in the mail: your boyfriend of the
past nine years is engaged to someone else.
You can’t say yes — it would be too awkward — and you can’t say no — it would look like defeat. On your
desk are a series of invitations to half-baked literary events around the world.

QUESTION: How do you arrange to skip town?
ANSWER: You accept them all.

What would possibly go wrong? Arthur Less will almost fall in love in Paris, almost fall to his death in Berlin, barely escape to a Moroccan ski chalet from a Saharan sandstorm, accidentally book himself as the (only) writer-in-residence at a Christian Retreat Center in Southern India, and encounter, on a desert island in the Arabian Sea, the last person on Earth he wants to face.

Somewhere in there: he will turn fifty. Through it all, there is his first love. And there is his last. Because,
despite all these mishaps, missteps, misunderstandings and mistakes, Less is, above all, a love story.
A scintillating satire of the American abroad, a rumination on time and the human heart, a bittersweet
romance of chances lost, by an author the New York Times has hailed as “inspired, lyrical,” “elegiac,”
“ingenious,” as well as “too sappy by half,” Less shows a writer at the peak of his talents raising the
curtain on our shared human comedy. (From the publisher.)

Please note that these questions are in chronological reading order of the book’s chapters. Spoiler alert
for some of the latter questions below.
1. The novel’s opening line reads: “From where I sit, the story of Arthur Less is not so bad.” Arthur Less,
the book’s protagonist, is introduced as nearly 50, with “washed-out” blonde hair and “watery” blue eyes.
As we soon learn, he’s also a writer less successful than his peers. How do you see Arthur Less in the
opening chapters? Do you see him as a hero, as a man deserving of pity, as something else?
2. When we meet the character of Freddy, Arthur Less’s soon-to-be-former-lover, he is described as
“dreamy, simple, lusty, bookish, harmless, youthful.” It is Freddy’s marriage invitation that Less so
studiously avoids — choosing to go on a round-the-world trip simply to avoid having to decline the
invitation without a good reason. What do you make of this decision? Have you ever found yourself doing
something similarly absurd?
3. Arthur Less’s trip itinerary is as a follows: New York to interview a more popular writer, Mexico City for
an obscure conference, Turin for an unknown award, Berlin for a teaching gig, Morocco for someone
else’s birthday, India for a writer’s retreat (possibly during the monsoon), Japan for an article. And
somewhere along the way he will turn 50. Does his sojourn remind you of any others in literature?
4. The book Arthur Less is writing is about a man on a journey through a place and his past, as he looks
back on a series of disappointments. Freddy complains that Less is always writing “gay Ulysses.” Do you
see echoes of or references to Ulysses or the Odyssey throughout “Less”?
5. Less’s other major relationship in the book is with the famous poet Robert Brownburn. In the chapter
“Mexican,” Less recalls a day of losing his ring in the grocery store, and how, in telling Robert about it,
Robert saw Less’s infidelities written across his face. “That’s what it was like to live with genius,” he
writes. How does Robert’s success and genius impact their relationship at the time, and how does it
influence him in the end?
6. So much of Less’s focus during the round-the-world trip is on his own mishaps and foibles — or his
perceived mishaps and foibles. Getting into a car with what he believes is the wrong driver because the
name was a letter off. Believing he can speak German well when in fact he is bungling the words.
Bringing athletic bands to every country that he will only half use. Do you see these as actual mishaps
and foibles or is it a problem of perception for Less? Do you identify with that feeling at all?
7. The book alternates between Less’s trip in the present to memories of his youth — mostly memories
involving nostalgia or regret. And yet the narrator tells us that Less also understands the pleasures of
age: “comfort and ease, beauty and taste, old friends and old stories….” How does Less’s grappling with
age play a role in the book? Is it something you can relate to?
8. In a scene at a party in Paris, Less is told that in fact he is not a bad writer, as he had come to believe,
but a bad “gay writer,” in that he is not telling the narratives the gay writing community wants him to. What
do you make of this critique?
9. In several countries, simply being around Less seems to make other characters sick. Why?
10. Arthur Less is self-deprecating throughout the book to a fault; in one of many descriptions he calls
himself insignificant compared to other writers he knows, “as superfluous as the extra a in quaalude.”
(Earlier, though, he asks if there is “any more perfect spelling” than the word quaalude “with that lazy
superfluous vowel.”) Did you find these negative descriptors by Less funny or frustrating or silly or all of
these? How does Greer complicate these descriptions by having some of them echo back?
11. A number of people try to tell Less about what happened at Freddy’s wedding. And while the wedding
dominates his thoughts, he doesn’t listen to them. What is keeping him from hearing the story? What do
you think (or hope) happened?
12. In the book, “Less” is always referred to by his last name, while Javier only by his first, and Robert
Brownburn by both. Why do you think Greer chose to refer to the characters in these different ways?
13. What lines in the book made you laugh out loud?
14. Toward the end of the book, Less reunites with his supposed enemy and Freddy’s father, Carlos.
When they meet, Carlos tells him that he believes that people’s lives are half-comedy and half-tragedy
and that those just appear at different times. What do you make of this theory?
15. Were you surprised (or glad) to find out who the narrator was? Do any elements of the book change
for you when you revisit them with Freddy as the narrator in mind?
16. The penultimate lines of “Less” (from Freddy’s voice) read: “After choosing the path people wanted,
the man who would do, the easy way out of things … after holding it all in my hands and refusing it, what
do I want from life?” What do you want from life? Have you similarly strayed from the path you thought
you should be on?
17. After learning he won the Pulitzer Prize, Andrew Sean Greer wrote on Twitter that “Less” is a book
that’s most of all “about joy.” “A writer friend once said the hardest thing to write about is joy,” he wrote. “I
took it as a challenge.” Do you think he met the challenge?
(Publisher-provided book club questions are not available for Less; these questions were taken from the
PBS NewsHour-New York Times book club, “Now Read This” site.)

Other Works by Andrew Sean Greer

If You Liked Less, may we recommend …