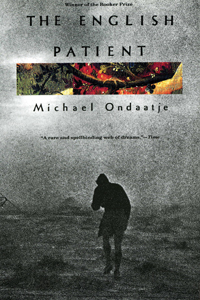 “The best piece of fiction I’ve read in years,” Independent on Sunday

The final curtain is closing on the Second World War and in an abandoned Italian village. Hana, a nurse, tends to her sole remaining patient. Rescued from a burning plane, the anonymous Englishman is damaged beyond recognition and haunted by painful memories.

The only clue Hana has to unlocking his past is the one thing he clung on to through the fire – a copy of The Histories by Herodotus, covered with hand-written notes detailing a tragic love affair. (From the publisher.)

Other Works by Michael Ondaatje

If You Liked The English Patient, may we recommend …

LitHub: Michael Ondaatje On the Books He Loves to Reread

The Guardian Interview: “It’s The Book That Gave Me Freedom”

The Independent Review of The English Patient

VIDEO: Michael Ondaatje Interview: We Can’t Rely on One Voice