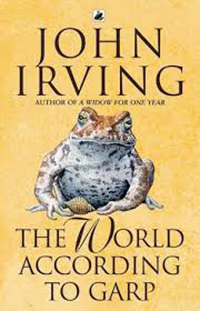 An international bestseller since its publication in 1978, The World According to Garp established John Irving as one of the most imaginative writers of his generation.

This is the life of T. S. Garp, the bastard son of Jenny Fields—a feminist leader ahead of her times. This is the life and death of a famous mother and her almost-famous son; theirs is a world of sexual extremes—even of sexual assassinations. It is a novel rich with “lunacy and sorrow”; yet the dark, violent events of the story do not undermine a comedy both ribald and robust. In more than thirty languages, in more than forty countries—with more than ten million copies in print—this novel provides almost cheerful, even hilarious evidence of its famous last line: “In the world according to Garp, we are all terminal cases.”

1. In the preceding essay, John Irving writes about his frustration in trying to determine what The World According to Garp is about. He finally accepts his young son’s conclusion: “The fear of death or the death of children—or of anyone you love.” In your opinion, is this the most overt theme of the novel?

2. Feminism comes in many flavors in the novel. The most obvious, perhaps, are Jenny Field’s straightforward brand of feminism, Ellen Jamesian’s embittered, victimized type, and Roberta Muldoon’s nurturing, female-embracing style. But are there other characters who portray less distinct, murkier shades of feminism? What is feminism in the lives of Helen Holm, Charlotte the prostitute, Mrs. Ralph, and other women in the novel? And what does feminism mean to Garp?

3. How does The World According to Garp ultimately assess the prospects of understanding between the sexes? Support your opinion with examples from the novel.

4. In the novel, we read about a variety of biographers’ theories on why Garp stopped writing—and what motivated him to write again—albeit for a very short-lived time. Helen agreed that Garp’s collision with his own mortality brought him back to his craft. If you were the biographer of T. S. Garp, what would your theory be?

5. Garp’s vehemence against “political true believers” is a major force of the novel and he maintains that they are the sworn enemy of the artist. The Ellen Jamesians are a farcical portrayal of this notion. In your opinion, what is the relationship between art and politics—and is it possible for them to successfully coexist?

6. After the terrible accident in which Duncan is maimed, many pages pass before Walt’s death is acknowledged to the reader. And then, it is given a tragic-comedic twist; Garp announces in an Alice Fletcher-like lisp that he “mish him.” What was the effect of this narrative device on you? Was the sorrow intensified or assuaged?

7. The narrator’s voice is ironically detached and almost flippant—even when delivering the most emotionally charged, heartbreaking moments in the novel. In what ways does the narrator contrast and play against the novel’s dramatic elements? How is it similar—and different—from the voice of Garp?

8. People who have read and loved The World According to Garp consistently comment on the extraordinary ability of the novel to provoke laughter and tears simultaneously. Was this your experience as well? If so, how do you think this effect is achieved?

9. What is the significance of the meta-fiction—the stories within the story? How does Garp’s “writing” voice compare to our perception of him as a character?

10. Over the last fifteen years The World According to Garp has entered the canon of literature. How do you think it is perceived now in comparison to when it was first published in the late ’70s? Is the American moral center much different today than it was then? For example, despite Garp’s and Helen’s indiscretions, their relationship is still portrayed as loving and supportive. Do you think that today’s social climate is as accepting of these kinds of transgressions?

11. In his afterword, John Irving admits to having been “positively ashamed of how much lust was in the book. Indeed, every character in the story who indulges his or her lust is severely punished.” How do you feel about that condemnation? Is the world an arguably more precarious place because of lust?

12. What do the peripheral characters contribute to the novel? Is there a common thread they share—Mrs. Ralph, the young hippie, Dean Bodger, Ernie Holm, “Old Tinch,” the Fletchers?

13. The World According to Garp has been heralded as a literary masterpiece while at the same time enjoying phenomenal commercial success—a rare feat for a novel. What are the elements of high literary merit in the novel? Likewise, what aspects of the book land it squarely into the mainstream consciousness? In your opinion, how is this balance achieved?

14. Have you read any other John Irving novels? If so, did you find any similarities between them in style or tone?
(Questions issued by publisher.)

If You Liked The World According to Garp, may we recommend …

Life & Times: John Irving – Links to L&T articles about and by Mr. Irving in The New York Times

New York Times Book Review of The World According to Garp