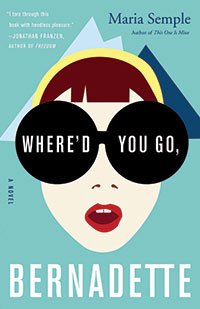 To her Microsoft-guru husband, she’s a fearlessly opinionated partner; to fellow private-school mothers in Seattle, she’s a disgrace; to design mavens, she’s a revolutionary architect, and to 15-year-old Bee, she is a best friend and, simply, Mom.

Then Bernadette disappears. It began when Bee aced her report card and claimed her promised reward: a family trip to Antarctica. But Bernadette’s intensifying allergy to Seattle—and people in general—has made her so agoraphobic that a virtual assistant in India now runs her most basic errands. A trip to the end of the earth is problematic.

To find her mother, Bee compiles email messages, official documents, secret correspondence—creating a compulsively readable and touching novel about misplaced genius and a mother and daughter’s role in an absurd world.

1. Where’d You Go, Bernadette is told from the point of view of a daughter trying to find her missing mother. Why do you think the author chose to tell the story from Bee’s perspective? What light does it shed on the bond between Bernadette and Bee?

2. What are your thoughts on Bernadette’s character? Has she become unhinged or has she always been a little crazy? What, if anything, do you think sent her over the edge? Have you ever had a moment in your own life that utterly changed you, or made you call into question your own sanity?

3. When Bernadette relocates from Los Angeles to Seattle, she must cope with being a transplant in a new city. Have you ever moved, or even stayed put but switched jobs, and had to adjust to an entirely different culture? What was it like?
4. The idea of going to Antarctica becomes too much for an already frazzled Bernadette to bear, but the trip itself, surprisingly, turns out to be exactly what she needs to get back on track. How do other characters in the novel experience their own breakthroughs? Which character is most transformed?

5. How are Audrey Griffin and Bernadette Fox more alike than they realize?

6. Bernadette often behaves as if she is an outsider. Do you think she is? If so, do you think her feelings of being an outsider are self-imposed, or is she truly different from the other members of her community? Do you ever feel like an outsider?

7. The book has a very playful structure. Do you think it works? Why do you think the author chose it rather than a more straightforward, traditional structure? Think about other books with unusual structures and how their formats influenced your reading experience.

8. What do you think of Bernadette and Elgie’s marriage? Is it dysfunctional? Is there real love there? How has their marriage changed over time? Think about romantic relationships you’ve been in that have evolved, positively or negatively, and why.

9. Where’d You Go, Bernadette is, at its core, a story about a woman who disappears, both literally and figuratively. Were you able to relate to the book? How and why? Do you feel Bernadette’s disappearance was unique, or do all women, in a sense, disappear into motherhood and marriage?
(Questions issued by publisher.)

If You Liked Where’d You Go, Bernadette, may we recommend …

The Murder of Bindy MacKenzie, by Jaclyn Moriarty
This Must Be the Place, by Maggie O’Farrell
The Sweetness at the Bottom of the Pie, by C. Alan Bradley
The Portable Veblen, by Elizabeth McKenzie
The Rosie Project, by Graeme Simsion
The Family Fang, by Kevin Wilson
Man at the Helm, by Nina Stibbe
A Man Called Ove, by Fredrik Backman
The Guineveres, by Sarah Domet
The Wangs vs. the World, by Jade Chang
Saving CeeCee Honeycutt, by Beth Hoffman
How To Write a Novel, by Melanie Sumner

Fast Company, “Maria Semple On Making A “Where’d You Go, Bernadette” Film And The Catch-And-Release Process of Writing”

VIDEO: Politics and Prose: Maria Semple, “Today Will Be Different”